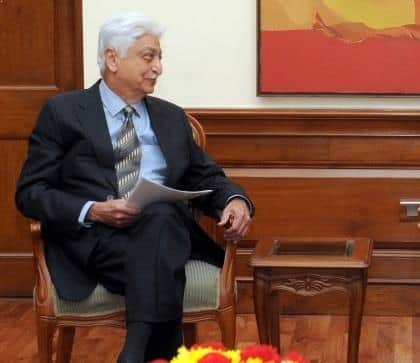 Azim H. Premji (born 24 July 1945) is an Indian business tycoon, investor, and philanthropist. who is the chairman of Wipro Limited, an Indian Information Technology Services corporation headquartered in Bangalore, India.

Inspired by his own mother who dedicated her life in helping to build and run a charitable hospital for Polio and Cerebral Palsy Children in Bombay, Premji founded Azim Premji Foundation in 2001. Azim Premji Foundation is a non-profit organization, with a vision to significantly contribute to achieving quality universal education that facilitates a just, equitable, humane and sustainable society. The Foundation currently has 800 people spread across the country: most of whom are engaged in some of the most disadvantaged regions of the country, and others at the Azim Premji University in Bangalore. The Foundation plans to scale up to 4000-5000 people over the next 5 years.

In December 2010, he pledged to donate USD 2 billion for improving school education in India. This donation is the largest of its kind in India.

In April 2013 he said that he has already given more than 25 per cent of his personal wealth to charity.

In his pledge, he wrote:” I strongly believe that those of us, who are privileged to have wealth, should contribute significantly to try and create a better world for the millions who are far less privileged. I will continue to act on this belief.”

In 2011, he has been awarded Padma Vibhushan, the second highest civilian award by the Government of India.

In 2013, he received the ET Lifetime Achievement Award.

In 2015, University of Mysore awarded Azim Premji with the honorary doctorate.