Donald Trump and Arnold Schwarzenegger created their own high rating on Twitter with their word war on tweets regarding the disappointing rating of "The Celebrity Apprentice" show. 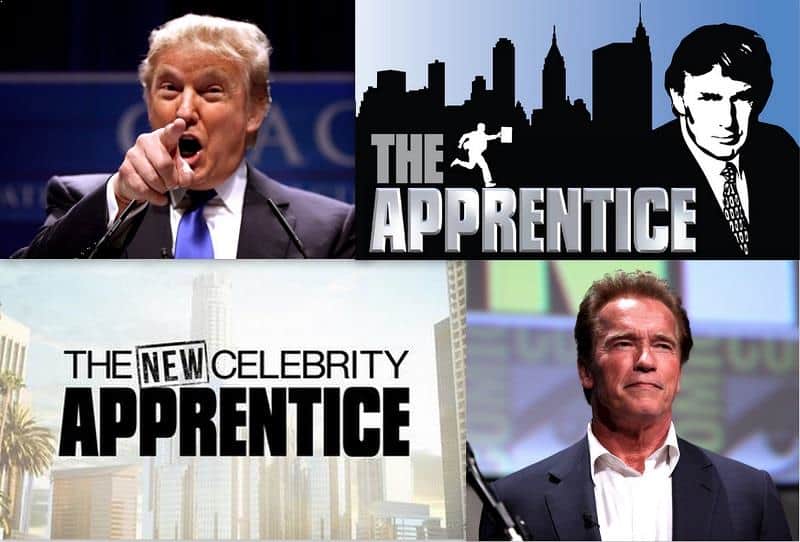 On February 2nd, 2017, at the National Prayer Breakfast, during his opening remarks, President Trump blamed the former California governor Arnold Schwarzenegger for the low rating of “The Celebrity Apprentice” show since Arnold Schwarzenegger hosted the show. Trump boasted his “tremendous success” on “The Apprentice” show and he had to leave the show to focus on his presidential campaign. He said, “And they hired a big, big movie star -- Arnold Schwarzenegger -– to take my place. And we know how that turned out. The ratings went right down the tubes. It’s been a total disaster. And Mark will never, ever bet against Trump again. And I want to just pray for Arnold, if we can, for those ratings, okay?”

This was not the first time Trump pointed the finger at Arnold Schwarzenegger for the low rating of “The Celebrity Apprentice”. On January 6th, 2017, nearly 2 weeks before his inauguration, Trump blamed the Terminator actor for destroying the rating record of “The Apprentice” show. Trump also called himself “the ratings machine” from his tweet under @realDonaldTrump account.

Wow, the ratings are in and Arnold Schwarzenegger got "swamped" (or destroyed) by comparison to the ratings machine, DJT. So much for....

Eight minutes later after the first tweet, Trump fired another tweet from @realDonaldTrump to Arnold Schwarzenegger regarding to the rating again:

being a movie star-and that was season 1 compared to season 14. Now compare him to my season 1. But who cares, he supported Kasich & Hillary

Arnold Schwarzenegger fired back at President Trump with his low approval rating, tagging directly to @realDonaldTrump

By breakfast time, Arnold Schwarzenegger quickly threw back at Trump with a sarcastic response that he wished Trump would work hard for the people, emphasized on “all” Americans, as hard as he did for his Apprentice show.

I wish you the best of luck and I hope you'll work for ALL of the American people as aggressively as you worked for your ratings.

Getting two hits below the belt from Trump on Twitter word fighting ring, the former California governor Arnold Schwarzenegger, just as quickly as the first tweet, continued with his sarcastic response tagging @realDonaldTrump, reminding Trump to study the quote from Lincoln's inaugural that “It inspired me every day I was Governor, and I hope it inspires you.”

Here is the transcript of Arnold Schwarzenegger’s video in which he quoted one of the greatest president of the United States, Abraham Lincoln. The country was on the verge of civil war, in his inauguration speech, Abraham Lincoln called on to all Americans to be united, reminded all that we are not enemies.

“We are not enemies, but friends. We must not be enemies. Though passion may have strained it must not break our bonds of affection. The mystic chords of memory, stretching from every battlefield and patriot grave to every living heart and hearthstone all over this broad land, will yet swell the chorus of the Union, when again touched, as surely they will be, by the better angels of our nature.”

Please study this quote from Lincoln's inaugural, @realDonaldTrump. It inspired me every day I was Governor, and I hope it inspires you. pic.twitter.com/QRoOFTZfQ9

Trump’s remark at the National Prayer Breakfast in the morning was another blow to Arnold Schwarzenegger’s face to pull him back into the word fighting ring. He fired back at President Trump in his Twitter video on the same day, “Hey Donald I have a great idea. Why don’t we switch jobs? You take over TV, because you’re such an expert in ratings, and I take over your job. And then people can finally sleep comfortable again.”

Reference material: "Remarks by President Trump at National Prayer Breakfast" by Office of the Press Secretary from The White House.