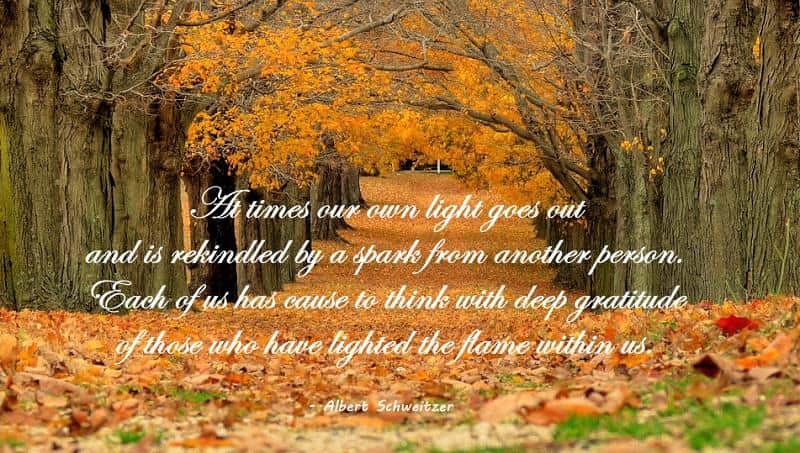 Autumn in Millstone NJ. Photo by b k,  licensed under CC BY-SA 2.0

"At times our own light goes out and is rekindled by a spark from another person. Each of us has cause to think with deep gratitude of those who have lighted the flame within us." - Albert Schweitzer

Albert Schweitzer (14 January 1875 – 4 September 1965) was a French-German theologian, organist, philosopher, and physician. He received the 1952 Nobel Peace Prize for his philosophy of "Reverence for Life", expressed in many ways, but most famously in founding and sustaining the Albert Schweitzer Hospital in Lambaréné, now in Gabon, west central Africa (then French Equatorial Africa). Schweitzer considered his work as a medical missionary in Africa to be his response to Jesus' call to become "fishers of men" but also as a small recompense for the historic guilt of European colonizers. He thought that Western civilization was decaying because it had abandoned affirmation of life as its ethical foundation. His personal philosophy was the idea of Reverence for Life “I am life which wills to live, and I exist in the midst of life which wills to live.”