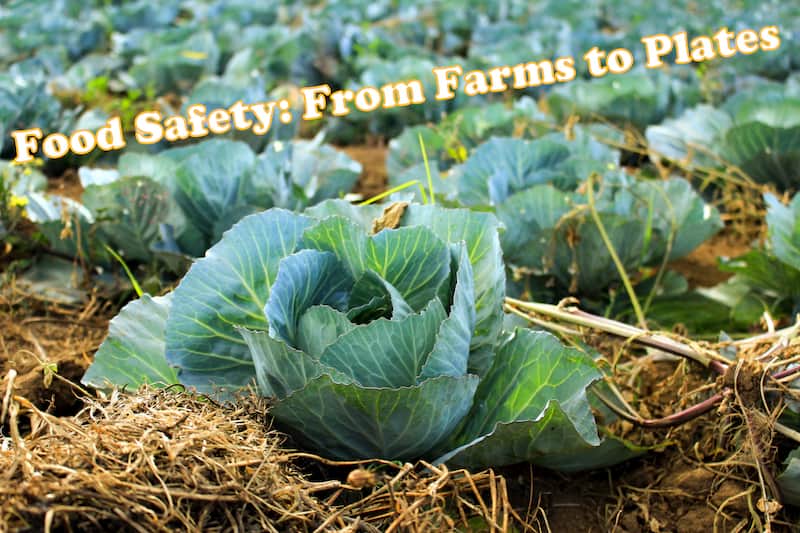 Food Safety: Locally Grown, From Farms to Your Plates

In recent years, more and more food we consume daily has been imported from other countries. The foods we eat today come from a global marketplace comprising over 170 countries. Some of them are labeled as “organic” food. Some are advertised as natural produces, wild-caught or free-range meat, fish or poultry. It has been a constant debate among consumers and suppliers on whether consumers can trust these imported food followed the same guidelines and rules as in the States by the USDA.

Even though our food supply in the United States is among the safest in the world, the Federal Centers for Disease Control and Prevention (CDC) estimates that there are about 48 million cases of foodborne illness in the U.S. annually, sickening 1 in 6 Americans. Some of the food being recalled had USDA stamps on them. We would never know the exact count of how many people got sick in the United States directly caused by foodborne pathogens. In fact, there is only a small fraction of foodborne disease cases get reported through official reporting systems. Foodborne illnesses happen often because of the mishandling the food, inadequate safety measures in processing, transportation or storage; also because of the environmental factors like pollution, contaminants in soil or water. Ensuring the safety of our food supply requires a farm-to-table approach. We, as consumers, should take a proactive approach and learn to know the sources of our food and how their food handling processes are before it gets to your dining table.

In 2008, there was report about some of Whole Foods Market organic frozen products under labeled “365 Everyday Value” imported from China instead of “locally grown, raised and produced” as their company’s marketing motto. In 2010, the company has tried to replace most of the imported frozen products with produces grown and produced in the USA, except for the frozen edamame products, organic or non-organic. In their recent statement posted on March 1st, 2017, Whole Foods Market disputed the rumor once again and this time they proudly announced even the edamame products sold at the stores are grown in the USA. Whole Foods Market also disputed the rumors of the unstandardized organic products sourcing from outside of US. According to them, “any product labeled as organic, whether it is grown in the US or any other country in the world, must meet US organic standards.”

Would you be willing to pay extra money for organic-claimed products even though you do not know for sure whether the organic standards are strictly applied or not?

Despite the doubts you might have in mind on imported produces, from time to time, we might run into products with labels do not list the sources. If in doubt, you can always bypass the products and find some other clearly labeled items.

Here are just a few examples of the products imported to the United States with their risks of toxic chemicals and food handlings outweigh the health benefits:

Goji berry (wolfberry) is a bright red orange oblong-shape, tiny berry coming from Lycium chinense shrub. Goji berry is rich in nutrients and antioxidants. It is considered the golden seed, the super fruit, a gift dating back ancient Tibet villages. It is believed to help fight illnesses like diabetes, high blood pressure, promote heart health, cure sleep apnea and improve eye sights. With the immense health benefits of this golden seed, it has been grown and cultivated commercially for many years. The majority of commercially produced Goji berries come from the Ningxia Hui Autonomous Region of north-central China and the Xinjiang Uyghur Autonomous Region of western China, where they are grown on plantations totaling 200,000 acres. China's Green Food Standard, administered by the Chinese Ministry of Agriculture's China Green Food Development Center, permits some pesticide and herbicide use on the berries like DDT and other toxic chemicals. These wolfberries with high levels of pesticides and impurities make them unusable for medicine purposes or food sources. Despite the toxic pesticide residues on Goji berries, they are still being exported out to other countries including US. In 2007 to 2009, the U.S. Food and Drug Administration (FDA) was able to stop 24 shipments of contaminated wolfberries from China. Many of these products were even labeled as “organic”. Unfortunately, it is impossible to inspect every shipment coming in US. The best way to give your body the health benefits from Goji berries and with the peace of mind knowing that they are safe for your consumption is sourcing for Goji berries grown and cultivated locally or within trusted farms in US or Canada.

China is presently one of the world's largest producers and consumers of agricultural products, and a major supplier to the U.S. of seafood, canned vegetables, fruit juices, honey, and other processed foods. In the past, FDA has encountered compliance problems with several Chinese food exports, including lead and cadmium in ceramic ware used to store and ship food, and staphylococcal contamination of canned mushrooms. While improvements have been made in these products, the safety of food and other products from China remains a concern for FDA, Congress, and American consumers. By volume, China is the largest exporter of seafood to the U.S. and the second largest in terms of monetary value. In particular, China exports significant amounts of shrimp and catfish products, which represent two of the ten most consumed seafood products in the U.S. As the aquaculture industry continues to grow, concern about the use of unapproved drugs and unsafe chemicals in aquaculture operations has increased significantly. Since November 2001, FDA has tested shipments of aquacultured seafood products from China and other countries, and when residues of unapproved drugs have been found, has placed individual firms on Import Alert. Because the problems were seen in product from many different companies in China, FDA imposed a countrywide Import Alert (IA #16-131) on all farm-raised catfish, basa, shrimp, dace and eel from China.

In an article published by NPR, it stated that 50% of shiitake mushrooms imported from China. However, not every grocery store clearly labeled the origins or sources of the mushrooms, where they were grown and cultivated. Most of these imported mushrooms were bought by distributors and repackaged under a company in US. The problems with mushrooms, among other imported produces, from China are serious matters. According to China News Service, white button mushrooms were treated with sodium sulfite, a chemical used to whiten and preserve food. Excessive intake can cause severe damage to the liver and kidneys. According to FDA guideline, labeling is required when sulfites are present in foods at levels at or above 10 parts per million (ppm) or whenever they’re used as a preservative. To be on the safe side, buy locally grown mushrooms or from trusted farms in US or Canada where there are strict guidelines and regulations to protect public health.

There are many other food produces/ products raised concerns to consumers. Make sure you check CDC and FDA websites frequently for recalls and alerts and always check the labels. Knowledge is power and that knowledge will help keep you and your family stay healthy and free off food-born illnesses.

Do You Know Where Your Mushrooms Come From?

The real risks of sulfites