Pufferfish - a delicacy in Japan 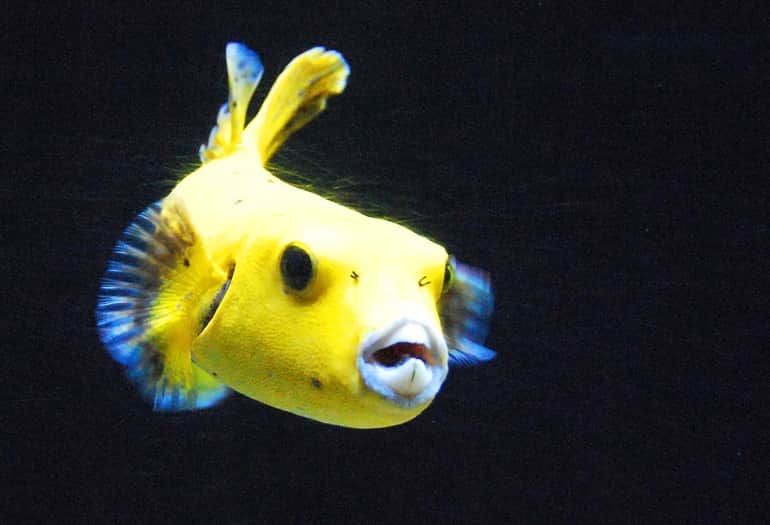 There are more than 120 species of pufferfish worldwide. Most are found in tropical and subtropical ocean waters, but some species live in brackish and even fresh water.

The diet of the pufferfish includes mostly invertebrates and algae. Large specimens will even crack open and eat clams, mussels, and shellfish with their hard beaks. Poisonous puffers are believed to synthesize their deadly toxin from the bacteria in the animals they eat.

Their backup defense is their famous ability to fill their elastic stomachs with huge amounts of water (and sometimes air) and blow themselves up to several times their normal size. Pufferfish can inflate into a ball shape to evade predators.

Some species also have spines on their skin to ward off predators. Even if a predator manages to swallow a puffer without dying from choking, soon the predator won't enjoy its meal at all. Most pufferfish stomachs are full of toxin called tetrodotoxin, making puffers an unpleasant, possibly lethal, choice of prey. This neurotoxin is found primarily in the ovaries and liver, although smaller amounts exist in the intestines and skin, as well as trace amounts in muscle. It does not always have a lethal effect on large predators, such as sharks, but it can kill humans. There is enough poison in one pufferfish stomach to kill 30 adult humans, and there is no known antidote.

Not all puffers are poisonous. Like the flesh of the northern puffer is not toxic and it is considered a delicacy in North America. In Japan, Takifugu oblongus or fugu is not poisonous and very expensive delicacies treat. They are prepared only by trained, licensed fugu chefs who know which area might contain toxin. Also, Japanese fish farmers have grown nonpoisonous puffers by controlling their diets.