Pesto sauce or pesto paste is commonly used on pasta. Pasta, mixed with pesto, has become a well-known dish in the majority of countries today. Pesto sauce is a very versatile paste. It can be used to compliment many dishes, from pasta to salad, to dipping sauce, to marinating meat or poultry, to use as sauce on the side for a dish. It is also added to a bowl of soup before serving to enhance the flavor of the soup. Its popularity in many cuisines and its simplicity in preparation make pesto sauce a must-have in every kitchen. 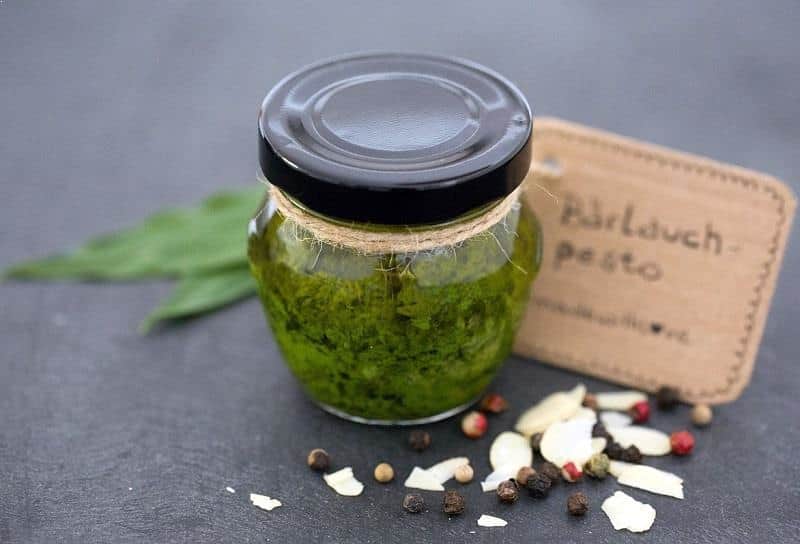 Pesto sauce is a sauce originating in Genoa, the capital city of Liguria, Italy.

There are two parent sauces which are closely resemblance to what we know nowadays as pesto sauce.

Going back in the Roman age, the ancient Romans used to eat a similar paste called moretum, which is a type of herb cheese spread on bread. A typical moretum was made of herbs, fresh cheese, oil, salt and some vinegar. In some variations, nuts were added. All ingredients were crushed together into a paste in a mortar, hence the name “moretum”.

Another similar sauce called agliata, which was basically a mash of garlic and walnuts during the Middle Ages in Genoan cuisine.

Pesto sauce is so popular in Italian cuisine and so easy to make. Despite its simplicity, there are many variations of making the sauce. Almost every Italian family has their own way to prepare it. It can vary in the ingredients you use:

- Freshness of the herb is the key to a good aroma of the paste/sauce. So if basil is not in season, some replace basil with fresh parsley or marjoram. In recent spin of the pesto sauce, chefs even use kale, arugula or cilantro to make pesto sauce instead of the traditional basil herb.

- The pesto sauce as we are familiar with nowadays has a nutty, buttery flavor coming from the use of pine nuts. But if you replace basils with kale, then you can replace pine nuts with almonds; while spicy arugula goes well with pecan.

- The pungent aroma of pesto sauce calls for lots of cheese like Parmigiano Reggiano or Grana Padano, or Pecorino Fiore Sardo or Pecorino Romano. Each different type of cheese would yield a slightly different taste and flavor.

Pesto Sauce: How to make

Though the traditional way to make pesto sauce is using a wooden pestle to crush garlic and pine nuts in a marble mortar till the mixture became creamy. Next step is crushing the basil leaves with coarse salt in the same mortar. Once the mixture becomes a paste, add a mix of Parmigiano-Reggiano and Pecorino with extra-virgin olive oil. Back-to-the-basic traditional way can be time-consuming.

The fastest way to whip up a pesto is in a food processor. First roughly chop the basils (or alternative greens/herbs), place the herbs/greens in the food processor along with the nut, olive oil and coarse salt. Pulse a few times until the mixture becomes a creamy paste. Finely grate the cheese and mix it in the paste till everything is combined.

Store pesto sauce in an air-tight jar, top the sauce with a layer of extra-virgin olive oil to prevent the sauce oxidized. Keep the sauce refrigerated but best to consume within a week.