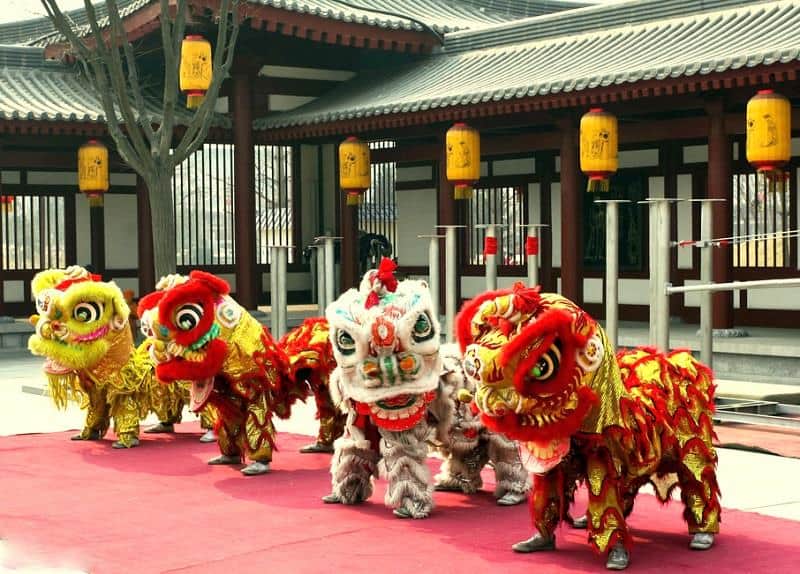 When is Lunar New Year?

Lunar New Year is the first day of a lunisolar calendar, a traditional Chinese calendar.

The traditional lunisolar calendar is based on astronomical and seasonal phenomena such as the moon and sun phases. No sophisticated astronomical instruments were necessary to observe the regular waxing and waning of the moon, and so it is the earth’s satellite itself that is considered to be the earliest instrument of celestial observation. Peasants could measure time by simply recording the revolutions and phases of the moon. In the traditional Chinese calendar, the day begins at midnight. The month begins on the day which has the new / dark moon. The years begin with the dark moon near the midpoint between winter solstice and spring equinox. The solar terms are the important components of the Chinese calendar. There are one to three solar terms within a month. Every 32 months to 33 months, a “leap month” is added to the lunisolar calendar to make 13 months in a leap year.

The lunisolar calendar has been evolved in many variations due to the use of different meridians which lead to the similar astronomical events but they fall on different dates in different countries. Therefore, the Lunar New Year is celebrated at different dates in some South East Asia countries like China, Vietnam, Malaysia, South Korea, North Korea, Taiwan, Singapore, Indonesia, Philippines and Brunei. Since 1873, Japan has celebrated New Year according to the Gregorian calendar. In Thailand, Chinese communities are also celebrated the start of Lunar New Year but it is not recognized as an official holiday. 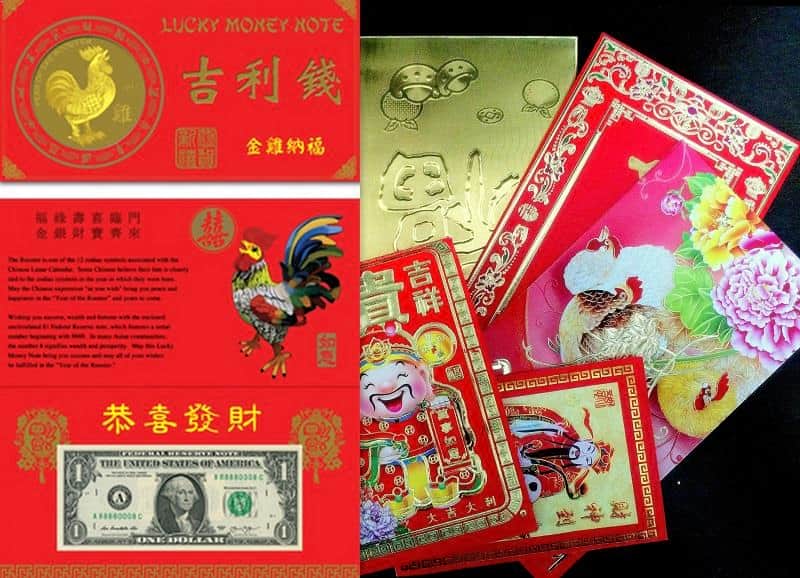 Red envelopes with “lucky money” inside have been given out during Lunar New Year celebration as a must-have tradition. Red color is a primary color for this particular holiday. Red is a color of energy, of fire, of passion, of desire, of power, of love. Married couples give out the red envelopes to unmarried ones to wish them having good relationships and love; to children as a wish for them to grow strong, energetic, enthusiastic and smart; to elderly as a wish for their good health and long lives; to business associates as a wish for good fortunes. This custom focuses on married couples who are fortunate enough to find love would spread the luck and joy to others. But this rule doesn’t apply for families. During Lunar New Year, relatives can also give lucky money to married couples as a way to wish them blissful marriages and happiness together.

One notable key is the lucky money should be crisp, brand-new bills to signify the new beginning. The amount of money varies but the total amount has to be an even number. It is important to avoid the number “four” (si), because it sounds like the word for death; any words and their homonyms related to death, illness, or bankruptcy are inauspicious.

It started from a folk tale in ancient time in China dated more than 2,000 years ago, there was a monster called Nian who would wreak havoc villagers’ homes and their crops, their farms. One day the villagers happened to burn bamboos when the monster approached the village. The hot fire and the cracking noises of the bamboos in the fire drove the monster away. Nowadays, firecrackers are fired at the start of the Lunar New Year to chase away evil spirits and bad energy. 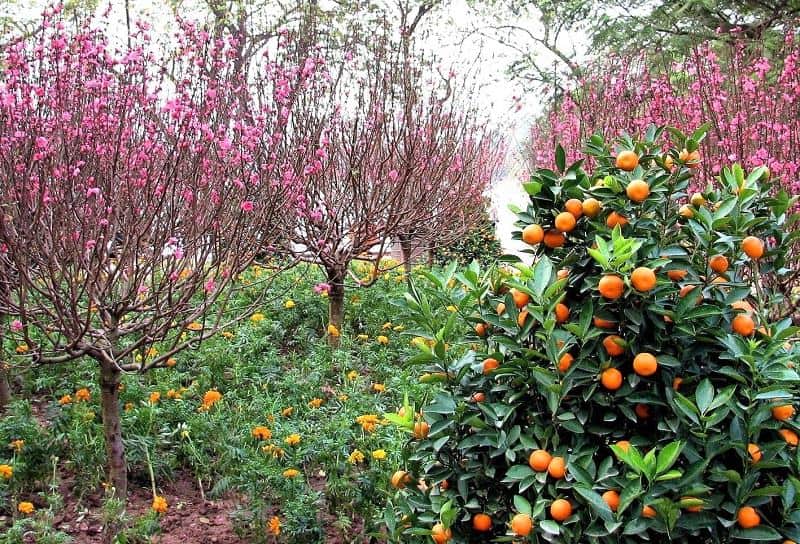 Lunar New Year in some areas is also called Spring festival to mark the start of a new season of the new year. It is a custom to have fresh flowers, new blooms or flower buds in the house during the festivity to symbolize a new growth, a rebirth, a new beginning.

The popular flowers to display during Lunar New Year are cherry or peach or plum blossoms to symbolize prosperity, growth, endurance and courage; orchids to symbolize fertility in women, also refinement and classiness; Narcissus flowers coming from the bulbs, if blooms in time, they symbolize good fortune and prosperity.

Fruits for the Lunar New Year carry equal importance as the flowers. Each fruit symbolizes a different meaning. Citric fruits are most popular fruits during this festivity due to their golden color of the fruits. Kumquat plants are potted to bring inside houses for indoor decoration. Kumquat, because of its shape and color, is symbol of happiness. An abundance of kumquats on a potted plant symbolizes richness, fullness in wealth. Pomelos are believed to bring good luck to families who have them displaying during Lunar New Year festivity. 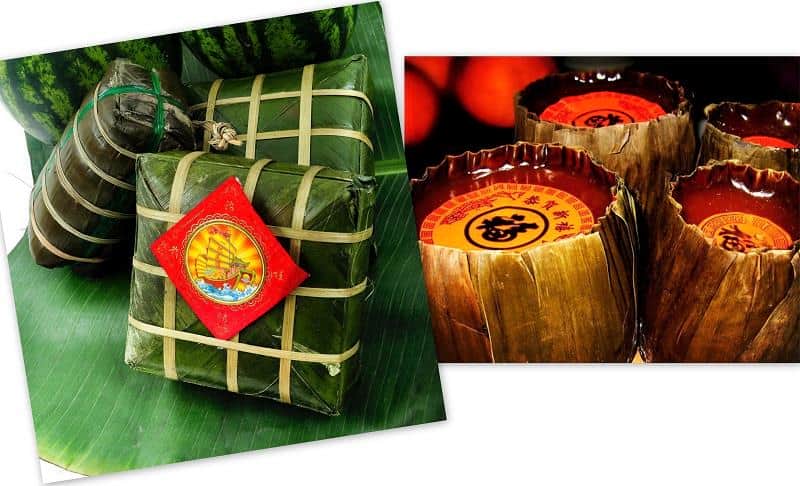 There are many dishes signifying a different meaning or belief to each culture, each family. Here are just a few popular food items for the Lunar New Year festivities which Chinese or people who celebrate Lunar New Year believe to be lucky for the new year.

The word “fish” in Chinese (Yu) sounds like the word “surplus” therefore at the first meal to start a Lunar New Year, a dish with fish is chosen as a must-have course. What kind of fish and how to prepare, how to eat the fish are also important.

Dumplings symbolize wealth. Most Chinese believe that the more dumplings you consume on the first day of Lunar New Year, the more money you make during that year. So eat up those delicious juicy dumplings and be prosperous all year round!

Glutinous rice cakes are also a popular item on the menu for Lunar New Year dining. The word for cake, gao, sounds like a term meaning “exalted” or “lofty,” and when preceded by the word for year (nian), is homophonous with a term that means to advance in an upwardly fashion, climbing up the ladder in society and workplace. In China, there is “Nian gao” sticky rice cake. While in Vietnam, there is “banh chung” or “banh tet”, also a savory sticky rice cake wrapped in banana leaves which symbolizes the pride in their heritage, their ancestors.

Lunar New Year Custom: Taboos, Things not to do on New Year’s Day

The celebration of Lunar New Year carries many superstitious beliefs and for those who celebrate this festivity, there are things to do and things to avoid during the very first day of the New Year to ensure a good start of a year filled with luck, health, wealth and happiness.

Here is the list of a few taboos you should try to steer away from:

Happy Year of the Rooster! Wishing you and your family a year full of health, prosperity and happiness!