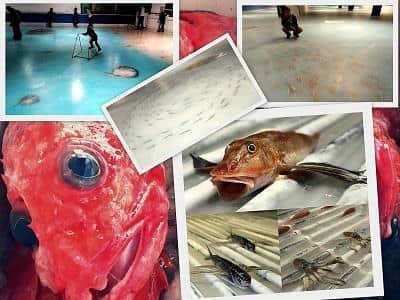 Space World is a theme park in Yahatahigashi-ku, Kitakyūshū, Japan. It offers a variety of attractions for kids, families & space-lovers of all ages. The theme park recently sparked outrages from public for their latest winter attraction called the “Freezing Port”.

The design idea behind the “Aquarium on Ice” is to create the unique experience for skaters like they were gliding across the ocean and for younger skaters to learn about the fish in the sea while having fun skating. There were 5,000 sea creatures like fish, shellfish, crabs, sting rays, even whale sharks … were frozen under the floor of the ice rink. The theme park assured that these sea creatures were bought from the local fish market. They were already dead, unfit to be consumed as food. They were embedded in the ice rink in different designs. In one area, a large school of black fish was arranged in circle. In another section, a school of red fish was half-buried with open-mouthed in ice.

The theme park design team thought it would draw more visitors to this unique attraction. Their post to advertise the new attraction on Facebook was recently removed. But according to CNN, the post included the images of the fish frozen under the ice rink with the caption “I am d... d... drowning, s ... s... suffocating.”

The theme park visitors weren’t thrilled to be surrounded by dead fish and especially to have their children skating on a sea of froze fish looking like they were stuck frozen with no escape except death. Pictures of the Freezing port attraction spark uproars on social networks. Animal activists called out the idea of freezing dead animals for people to skate on unhuman and cruel. Some even went as far as calling the designers behind the cruel idea “having no soul”.

Japanese are known for their respects to nature and animals. They are opposed to senseless killing of animals or using them for entertainments, dead or alive. In the book “Japanese Culture and Behavior: Selected Readings” written by Takie Sugiyama Lebra, he mentioned that at Osaka University Primatology department, memorial services held each spring for animals that were sacrificed in experiments and studies. Scientists, veterinarians and other professionals who had to kill animals in their work first ask a monk master to perform the ceremony. The memorial services could carry different meanings for each attendant. But it was the Japanese way to pay respect and thank the animals for the lives they were sacrificed for and to remind human the importance of these animal lives which shouldn’t be taken for granted.

Space World theme park issued this statement: “We deeply apologize to people who felt uncomfortable about the Ice Aquarium event. As a result, we have stopped the event from today. Misunderstandings spread on the internet that the fish were frozen while they were still alive, but that was not the case. We should have explained more."

Space World manager Toshimi Takeda told CNN that they will remove the fish from the rink and will host a memorial service for the dead sea creatures before returning them to earth as fertilizers.